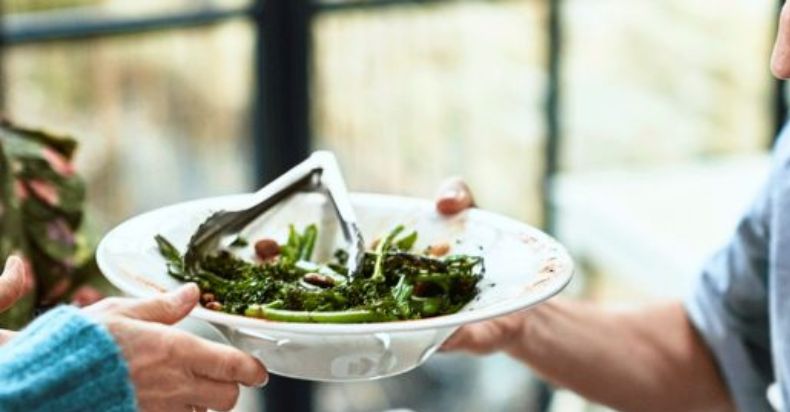 The vegan diet is based on the philosophy that animals should not be consumed as food. So if you are a vegan, the first answer is no. It is not okay for you to work in a restaurant that serves meat because otherwise, you are indirectly participating in hurting animals.

The vegan way of living has many health benefits, but its ethics play a significant role in the larger population. Studies are suggesting that eating meat causes some diseases, and eating plants prevents them.

But the critical issue is not if people should become vegan, but instead, they should respect vegans for what they are trying to do.

There are many reasons why someone would be a vegan or vegetarian that are more practical than ethical, but these reasons do not allow them to work in a restaurant that will hurt their beliefs.

Vegan restaurants often make these practices worse by serving processed fake meat like bacon or sausage. These fake meats sometimes may have animal byproducts in them, and they are typically preserved with nitrates or other chemicals that have been linked to various health problems.

I’ve been to many restaurants in the past that, when I found out they weren’t vegan-friendly, I left immediately.

One time I went into a restaurant to ask if they served anything vegan. When the host brought me back to their menu, I saw nothing vegan except some pasta dishes.

But even when you order it without meat sauce, the noodles are boiled in water with chicken broth or beef broth. So when you order any dish at this eatery, there is no way it can be considered vegan.

What do you think in a situation like this, where the restaurant makes it nearly impossible to eat vegan there?

Is it okay for a vegan to work in a non-vegan restaurant due to the scarcity of jobs, especially in restaurants with unethical business practices?

The vegan lifestyle typically attracts individuals with solid values for animal rights, sustainability, and health. These are all admirable qualities to have in a working environment- so why is it that some employers still discriminate against their vegan employees?

The answer may lie in the misconception that vegans cannot do specific jobs or work well with others because of dietary restrictions. Most people don’t even know what vegan means, which leads them to believe this false information.

It can be challenging to know if your coworkers are making inappropriate jokes about your lifestyle. You may even be taking comments personally, although they were not meant to offend you.

The only way to know if your coworkers are comfortable with you as a vegan is by asking them honestly how they feel about it and being completely open about how you feel.

After being so discriminating against, vegan employees should have the courage to stand up for themselves and address their concerns to their superiors. If they do not take the appropriate steps, the discrimination will continue, and it may even escalate into workplace bullying, which is not suitable for anyone involved.

Unfortunately, many non-vegan restaurants do not properly segregate their tools and utensils for a specific type of food, such as meat and vegetables.

These unhygienic food handling can contaminate the food with animal-based ingredients. Also, they often re-use cooking oil for meat dishes which can affect your health too.

Having a vegan employee will prevent this from happening. They can also help educate other employees on keeping vegan food separate and uncontaminated by non-vegan products.

Having strict rules and always ensure all equipment is correctly labeled and washed often.

Vegan employees are very passionate about their cause and more likely to do whatever it takes to ensure no contamination.

The Lingering Smell of Meat

Working in a non-vegan restaurant often produces an unwelcoming meat smell. Vegan may feel sick when they take in too much of this lingering meat smell.

Having an air purifier can help to eliminate those smells. We all should raise awareness of this issue and suggest solutions to make the work environment more comfortable.

Veganism is often considered radical, and it is no surprise that many non-vegans do not understand veganism.

Working in such an environment will have to face the customers who may try to convince you why you should eat meat.

You may feel very uncomfortable or even want to argue with the customers when you are faced with such a situation.

In extreme cases, some non-vegans may even be aggressive when they see the vegan refusing to eat meat.

In most non-vegan restaurants, waiters need to wear a dress code that includes having what is known as steak sauce and cheese on their uniforms.

For some, this symbol of a non-vegan restaurant is something that they would not like to wear on their uniform, as it goes against the fundamental of veganism.

Some vegan restaurants cook with processed fake meats to make their dishes taste better. Sometimes byproduct animal meat is found in processed meat, and they also use nitrates or other chemicals that can be dangerous for you to eat.

Vegans should not have to compromise their morals and beliefs because it is hard to find a restaurant that follows vegan principles.

Vegan employees can be very knowledgeable about food ingredients and how cooking methods affect the dish’s taste.

They are also more likely to have suggestions for new recipes that might appeal to non-vegans as well.

Vegan employees are often very passionate about their cause, that they would be more willing to take the initiative and suggest ways to improve the restaurant.

So, Should Vegan Work in a Non-Vegan Restaurant?

Vegans should also remember that being a vegan is part of who they are, but it is not all they are. Choosing one job that does not support your principle for more money or time freedom is only acceptable when no other options exist.

A vegan can choose to work at a non-vegan restaurant if no other job is available, but they should not be working there long term. If this means changing their career options, it might be better to struggle with a cruel job.

If you are vegan, please consider working for an animal rights group or similar. You can also encourage companies to switch towards using vegan ingredients.

Because if your veganism is about putting animals first and that eating meat is not okay because it means indirectly hurting animals, then working for an animal rights group or writing vegan recipes warrant more merit than just abstaining from eating meat.